Link – http://guppy-fish.com/best-brand-heater/
I felt like babbling about the best aquarium heaters and brands. It’s tough finding good heaters at a reasonable cost. I personally believe you need to break down and buy a good brand one and it will pay off for you. What if the heater fails or blows up..? It’s happened to me 3 times!

Join one of my facebook groups! Here are some topics: I know people generally suggest using a 100 watt heater for a 10 gallon, but would two 50 watts, one on either side of a divided 10 gal, be okay? Should be but I would keep an eye on them. i have a 50 watt for my 10, it keeps a nice temp. What kind of heater are you using? I use hydors. My house is cold, usually around 68-70 degrees. One 50 watt heater only gets a 10 gallon to about 75 degrees.

What are the odds my betta won’t kill a shrimp if I add one to his five gallon tank… How many people successfully keep a shrimp in with their bettas??? Pretty unlikely But shrimp are usually fairly inexpensive, if you want to give it a go. I have kept 4 ghost shrimp with 3 different bettas. i think it comes down to betta personality more than anything, type of shrimp next. only speaking from my own experience here. I have a betta living perfectly with four ghost shrimp as well. He is insanely chill and completely ignores them. I live in a small town surrounded by small towns and we only get amano shrimp around here but someone locally is selling pumpkin shrimp and I’m getting some for one of my big tanks and thought I might add one to my betta tank.

I have two amano shrimp and half dozen natural cherry shrimp (bred out color) if it’s heavily planted and there is Alot of places for them they won’t get eaten . This guy lives with my betta in a 13g. No issues. The shrimp is bigger than the betta though. I find it’s a lot easier to house shrimp with slower moving Bettas like halfmoons, feather tails, rose tails, and super deltas. Anything that can move quicker than those fish will enjoy a feast. 50:50 chance, I have one Betta that attacks any other live thing except me when introduced to his tank and another that just watches and chased them occasionally.

Depends on the Betta my Gru has the nickname grusome as he murderizes everything but Inigo is a gentle soul who lives in harmony with everything. Well pretty sure my betta killed them 😔 I didn’t even get to see them as I was working today and my dad picked them up and put them in my tank 😔 they were blue carbon shrimp. One thing I’m noticing with shrimp. THEY DISAPPEAR FOR VERY LONG PERIODS OF TIME BECAUSE THEY LOVE TO HIDE! I have thought my shrimp dead on several occasions but then randomly they seem to pop up out of nowhere. Often times they actually do get eaten by the fish. Sometimes they get left alone. I had shrimp in my sorority tank and the girls just ate them all. I have shrimp now with my male and he pretty much ignores their existence completely but they hide so often I forget they’re in there sometimes. Keep an eye out. You won’t know unless you find pieces of them during water changes.

For me keeping shrimp and betta together worked in one out of 5 cases.
This one betta was raised without any living food and he even left my sword tail fry alone that i raised in his tank. 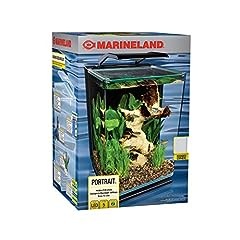 (4128)
SLEEK DESIGN: Rounded corners and clear glass canopy allow viewing from multiple angles. DAYLIGHT/MOONLIGHT LIGHTING: Bright white LEDs create a shimmering sunlight effect; blue LEDs produce a moonlit glow. EASY ACCESS: Hinged LED lighting and slidin... (as of November 15, 2020 - More infoProduct prices and availability are accurate as of the date/time indicated and are subject to change. Any price and availability information displayed on [relevant Amazon Site(s), as applicable] at the time of purchase will apply to the purchase of this product.) 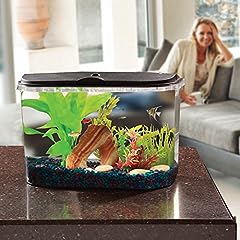 (2232)
Energy-efficient LED lighting with 7 dazzling color selections to brightly illuminate your fish; choose daylight white, blue, green, amber, aqua, purple, or red. Powerful internal power filter cleans and purifies aquarium water at a flow rate of 45 g... (as of November 15, 2020 - More infoProduct prices and availability are accurate as of the date/time indicated and are subject to change. Any price and availability information displayed on [relevant Amazon Site(s), as applicable] at the time of purchase will apply to the purchase of this product.) 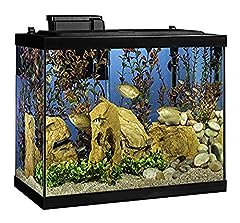 (574)
Tetra Glass Aquariums are made in the USA and are built to last with scratch resistant glass The Tetra Aquarium comes loaded with an LED hood, that provides a natural daytime effect and a Whisper Filter that is whisper quiet while providing powerful,... (as of November 15, 2020 - More infoProduct prices and availability are accurate as of the date/time indicated and are subject to change. Any price and availability information displayed on [relevant Amazon Site(s), as applicable] at the time of purchase will apply to the purchase of this product.) 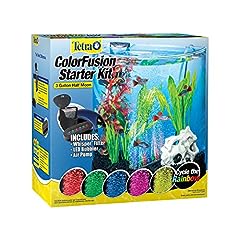 (1697)
AQUARIUM KIT: Half-moon shape allows 180-degree panoramic viewing – starter kit has everything you need BUBBLE CURTAIN Bubbling disc automatically cycles through a rainbow of LED light colors INCLUDES FILTER: Includes air pump-driven Tetra Whisper In... (as of November 15, 2020 - More infoProduct prices and availability are accurate as of the date/time indicated and are subject to change. Any price and availability information displayed on [relevant Amazon Site(s), as applicable] at the time of purchase will apply to the purchase of this product.)

When you talk about heater efficiency and about saving on power bill – this is a complete bullshit. Any heater has nearly 100% efficiency in converting electric power into heat: there is nothing else to waste the excessive power – heaters do not generate electromagnetic waves, light, etc. And since the heater is submersed, all the heat that is generated will eventually go into the water. Therefore, they are all equally efficient.

When choosing a heater, the only thing that is worth considering is if they have strong body (won’t easily break), their accuracy and reliability. Personally, I am a big fan of the Eheim Jager brand but I am sure there are many other good heaters around.

can I see your Oscar and convict tanks

cant even hear you.

Man, your uploads could be so much more complete and engrossing…if you’d just PUT THOSE LINKS IN THE DESCRIPTION BOX. Please make sure you actually place them in future uploads…especially if YOU mention them in the actual vid. Thank You, Chris.

Is the grreat choice Heaters good